Normally an industrial camera transmits the image to a PC for evaluation. A large number of different alternative interfaces and protocols serve as image transmission interfaces. They are explained in particular in the chapter "Interfaces"Interfaces".

Intelligent camera systems already evaluate the image in the camera unit. For set-up, as a feedback for the user and for error correction recording, these intelligent camera sensors can transmit the image by means of a USB or Ethernet interface. The image transmission, however, is only of minor priority, the evaluation has often already been completed before the image is transmitted. 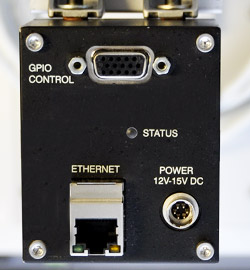