The use of coloured light sources is essential in industrial machine vision. Skilfully harmonising coloured light with the colour of the test objects allows for an increase (or decrease) of the contrast of particular colours. In this way colours with similar luminance values in the grey image can be better differentiated. Red and neighbouring green thus result in different shades of grey. The use of colour cameras is avoided in this way (especially the use of a single-chip colour camera implies some technical disadvantages).

Except for green logo with a high proportion of black disappeared almost anything, even blue logo and expiration date

If three light sources, one red, one green and one blue spot, illuminate an area on a wall, the result is white light where the light spots overlap. This can also be explained by means of the below spectrum of coloured LEDs: If the blue, green and red spectrum is combined, the result is a quite complete spectrum of all wavelengths, i.e. white light. This principle of colour mixing is called RGB model (each monitor works according to this principle). We speak of light colours.

Any type of coloured light can be used as illumination, also coloured fluorescent illumination, etc. In industrial machine vision, LED lighting has widely proven itself. The emission spectra are typically rather narrow-banded, which is advantageous for the practical use. For this reason, neighbouring wavelengths ranges can be blocked very well by means of filters. The reverse case is also practically relevant: filters pass the coloured light and possibly block interfering extraneous light.

The objects to be inspected are often coloured, too. The component was coloured by means of pigments or dyes. Apart from colour filters which can be screwed onto the camera lens, printing colours work according to this principle, too. If yellow and magenta are mixed, the result is red; mixing magenta with cyan results in blue, etc. The object does not fully reflect the incident light, but subtractively reduces parts of it. Then we speak of object colours. The colour model is named CMY(K) model after the colours cyan, magenta and yellow. (The colour K=key represents black which must still be added to generate very dark colours and shades of black.)

In industrial machine vision, both effects are combined. Coloured illumination can be used in order to darken the complementary object colour and to brighten up the same object colour.

A red imprint absorbs almost all colours except red when illuminated with white light. It reflects them back to the viewer. If red illumination is used, no red light is absorbed, i.e. almost the entire light quantity is reflected to the camera. The red imprint appears very bright.

A red imprint absorbs almost all colours except red when illuminated with white light. It reflects them back to the viewer. If green illumination is used, almost the entire light quantity is absorbed by the red printing colour. The red imprint appears very dark.

Two metals of the periodic system and also some alloys are coloured. Gold and gold-coloured objects (e.g. brass), for instance, may appear darker when using blue light and can be differentiated from other silver-coloured metals. Copper can be made darker using green or blue light according to the principle of subtractive colour mixing. 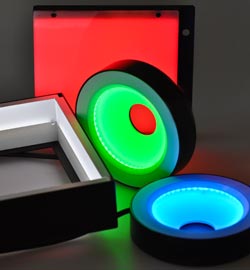