LED flash controllers are a perfect supplement for LED illumination. They have many advantages for the operation of the illumination and save money and maintenance time in the long run:

Due to the current control of the LED, a precise intensity control of the illumination is possible. Constant currents guarantee a uniform brightness. This effect can be used in flashed operation as well as in controlled permanent operation by means of a flash controller.

In pulsed operation (<= 100% power) and in flashed operation (several hundred per cent power), the illumination is switched off most of the time. Warming is prevented, the spontaneous luminous power of the LED remains constantly 100 % at an operating temperature of 25 oC.

In this way the service life of the illumination considerably increases. Aging effects and the associated intensity decrease are clearly reduced. Attention: only the temperature at the LED semiconductor crystal (junction temperature), where most of the heat is generated, is of technical interest. It is significantly higher than the temperature measured at the outside of the lamp housing.

Precise over-flashing of the illumination with a multiple of the power increases the luminance efficacy. The consequence is either a shorter exposure time in order to better freeze any object motion or the use of a higher focal ratio for more depth of field using the same exposure time.

More light also automatically means a reduction of the interference from the outside. Problems with daylight, for instance, can be avoided in this way.

Principle of the current control of an LED

How strong can an LED be flashed?

Under certain circumstances, an LED can emit a multiple of light without damage. The higher the flash current, the more light is emitted.

There are exemplary complex diagrams for different LED which provide information on how strong the flash may be. The below table illustrates these correlations in a clearly simplified way:

As a rough guide value an LED with an overall cycle time of approximately 5 per cent and a single pulse duration of 0.5 ms can be over-flashed fivefold and emits approximately 2.5 times the light quantity.

Important:
The uncontrolled overflashing of LED lighting can lead to damage to the illuminant. Please ask your machine vision expert for more detailed information for the correct operation, who will select suitable illumination and flash controller!
Please thoroughly acquaint yourself with the current safety regulations if strongly flashing light is used in the system. Perhaps shielding would be useful in this case. 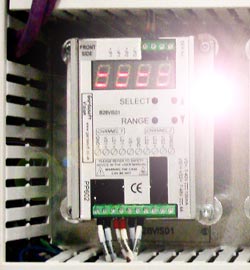