Transmitted light illumination is the first choice of lighting when it is necessary to measure parts as accurately as possible. The lighting is arranged on the opposite side of the camera, the component itself is put in the light beam.

For this purpose, the inspected part can...

The component itself is only recognisable as a silhouette, no statement can be made about the surface of the part. The area surrounding the object is the illumination into which the camera system looks. Because of this massively excessive light, the entire application is relatively resistant to stray light.

Image of an incandescent lamp. Note: Left image borders are already significantly shaded. This can lead to measurement inaccuracies.

In order to achieve the best measuring results, background illumination is used which...

All methods to prevent stray light create sharper edges richer in contrast in transmitted light as partial shade effects as edge fringes disappear in this way:

Contrast enhancement by means of polarisation

By using a polarizing filter on backlight and optics, the test object can be partially darkened by means of the effect of photoelasticity in case of transparent, hard plastics. Particularly highly transparent materials hardly generate any contrast in transmitted light, which is required to find the object or edges. This technique serves to increase the contrast and enhance an evaluation.

Particularly transparent and semi-transparent objects are screened in transmitted light, there is hardly any contrast and the objects are difficult to evaluate. Due to the smaller wavelength, short-wave light strays to a greater extent than longer-wave light. In this case, the use of blue instead of red light produced more than 10 per cent additional contrast.

Semi-transparent cable tie generated brightness contrast of 47 percent measured in the middle of object with the help of blue light. 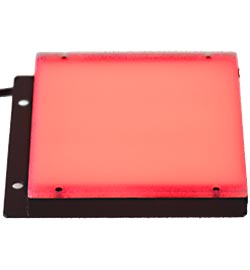