Lighting plays a major role for industrial machine vision: Not the object itself, but only the visual image of the object is checked! It follows that only homogeneous lighting conditions result in a consistent image of the same inspection object. Fluctuating light conditions are therefore to be avoided at all costs!

Ideally, the lighting is used so that a perfect light-dark contrast is created:

Lateral edges are very bright. Scratches and dust are visible.

Only if it is possible to visualize the desired test characteristics or errors with enough contrast, these can then be evaluated with the image processing software. Usually the object is illuminated by an external light source. This principle sounds very trivial, but the practice reveals that it is one of the main difficulties of industrial machine vision to make the error in the object visible at all for the camera.

Some examples to illustrate the difficulties

The key role plays the light with its interaction in a functional chain of illumination, test object, filter, lens and camera:

As the object characteristics of inspected part cannot or can only hardly be influenced, the object determines the illumination and the camera! The camera, in turn, defines the optics due to its working distance and mount, due to its data format and data rate it also determines the image acquisition card.


Conclusion:
It is therefore worthwhile to concentrate on light and its interactions with material and camera! 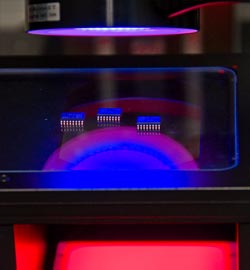