Another way to highlight features is the use of ultraviolet radiation which has a wavelength of 10 to 400 nm. By means of fluorescent lamps ("black light") or ultraviolet LEDs it is relatively simple to generate UV light with a wavelength of 365 nanometres in the near "UV-A range".

Nevertheless normal glasses absorb large quantities of the emitted light even in this range. This also applies to standard optics of the camera system, filter glasses and also the protective glass on the sensor. Many applications can still be solved using standard components, as the excitation due to UV radiation causes many materials to fluoresce in the visible range. Real UV applications in shorter-wave light ranges, however, require special optics, e.g. made of quartz glass, and special camera sensors with suitable detectors.

Why use ultraviolet radiation for inspection?

Short-wave radiation increasingly tends to reflection compared to long-wave radiation, as due to the short-wave oscillation there is much interaction even in case of minimum penetration depth. UV radiation is therefore ideal to inspect surfaces. Small features, dust and scratches are clearly visible in this way.

Furthermore there are many applications in which the UV radiation causes the material to be inspected to glow.

White glue on white plastic bottle is hard to see.

Security features of european driving are visible with the stimulation of uv radiation. Metal security strip also shiny (like with visible light). 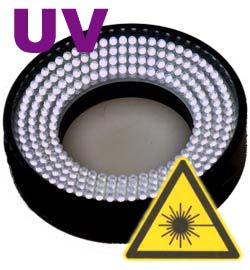