As an absolute high-end interface with the highest possible data rate, the CameraLink standard is well established in machine vision and completely replaced the LVDS interface.

CameraLink (CL) is a standard which was created by the Automated Imaging Association (AIA). The members of AIA are many renowned camera, frame grabber and software manufacturers in industrial machine vision. CL is an advancement of the Channellink protocol and was created in 2000 in the specification 1.0 especially for secure image transmission of large data quantities. The current standard is version 2.0, which was released in November 2011.

Advantages of the CameraLink interface

Conclusion:
CameraLink serves as well-established high-end interface in order to transmit large data quantities of single area scan or line scan cameras to a PC. Due to the system costs, CameraLink is too expensive for the mass of (simple) standard applications. Other digital interfaces are preferentially used for this purpose. 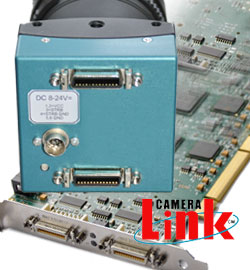