FireWire, also known as i.Link or IEEE 1394, is a serial bus system developed by Apple as successor of the SCSII bus. The brand name FireWire, to be found only on Macintosh computers by Apple for a long time, became popular only after the introduction of the i.Link interface by Sony as part of the IEEE 1394a standard for consumer products, such as camcorders. This 1394a standard, introduced in 2000, allows for a fast data exchange between computer and multimedia or other peripheral devices. FireWire now competes with the widely used USB 2.0 bus, however, it had a data rate of 400 Mbit/s already years before.

Advantages of FireWire IEEE 1394 a/b over other analogue systems

Advantages of FireWire IEEE 1394 a/b over other analogue systems

The successor IEEE 1394b is much faster than USB 2.0 (approx. 40 MB/s net), having an effective net image transmission bandwidth of approximately 75 MB/s.

The DCAM standard and IIDC

DCAM stands for "1394-based Digital Camera Specification" and specifies the behaviour of 1394-devices with uncompressed image data transmission (without audio). The DCAM standard is only supported by devices which provide a FireWire (IEEE 1394) interface. The responsible working group is the IIDC (Instrumentation and Industrial Control Working Group), thus the standard is called IIDC in newer specifications. Usually these are FireWire cameras with industrial features which are used for inspection applications, for instance. The DCAM standard also defines the standard resolution and image refresh rates of the cameras in different formats. A special role for industrial cameras, however, plays "format 7" which allows for random resolutions and frame rates.

It does not only define the structure of the image data stream generated by the camera, but also the basic parameterisation of the camera (e.g. exposure time, gain, white balance, etc.) and how the camera is to be parameterised.

The PC must support DCAM in order to communicate with a DCAM camera. For this purpose the operating system requires a DCAM driver which is already included in Windows 2000, XP and Vista. However it only supports the most important camera parameters.

Special drivers supplied by the individual camera manufacturers provide a remedy, who are of course interested in setting themselves apart from their competitors by means of special camera features (LUT, shading correction, special trigger modes, etc.). Only by using these drivers the full range of functions and performance of the hardware can be used, yet from this moment on, the camera system is proprietary and bound to one particular manufacturer. The Gigabit Ethernet / GenICam standard can provide a solution.


Neue Kameramodelle werden nicht mehr für diese Schnittstelle entwickelt, Kameras mit GigE Vision oder USB3 Vision Interface ersetzen zunehmend diese Geräte. Conclusion:
Camera families on the basis of FireWire a/b are available today which cover almost all fields of application from 0.3 to 16 megapixels, monochrome or colour, CCD or CMOS. Unfortunately, despite the DCAM/IIDC standard, cameras of different manufacturers are not really 100% plug&play-compatible, special features are only mapped in manufacturer-specific drivers. Without the use of fibre optic transmission, the cable lengths are limited, too.
New camera models are no longer being developed for this interface, cameras with GigE Vision or USB3.x Vision interface are increasingly replacing these devices. 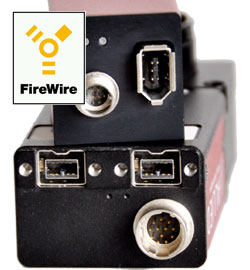