Selection of the right interface

This chapter exclusively explains interfaces for the transmission of images of an industrial camera to computer systems which then evaluate these data.

Mainly in the early days, analogue data interfaces were used for the image transmission of CCIR or PAL signals, etc., which then had to be digitalised by means of a frame grabber card on the PC. This method is still used in many fields of application, as the available technology is proven, robust and sophisticated.

New camera developments of the last years, however, reveal a trend towards digital interfaces, with the image already being digitalised in the camera and then sent to the computer as digital data without quality losses. Many of the interfaces used, such as USB 2.0, FireWire or Gigabit Ethernet, are already integrated in state-of-the-art mainboards today so that an additional plug-in card in the PC can be omitted.

Today the user can choose from a large number of interfaces which are capable to meet various requirements. In addition to the actual task of transporting data, the user should also pay attention to secondary features. Ruggedness, data security, long-time availability and compatibility are important criteria for industrial applications!

The forecast is bright to extremely sunny. The development of state-of-the-art interfaces advances continuously and is also adapted to image processing purposes with some delay. USB 3.0, IEEE 1394-2008 (S 3200), 10GigE and new inventions like CoaXPress are already at the ready today. The development of chip sets, cables and plugs is driven by the computer systems mass market and thus becomes cheap for all users.


Conclusion:
Interfaces with sufficient "power" are rarely a problem today. Select a universal solution which can be used for as many applications as possible. The individual manufacturers partially only provide certain interfaces so that different SDKs must repeatedly be used to connect the hardware. Therefore focus on suitable software solutions which support a wide range of hardware and interfaces. Then the interface discussion is mostly irrelevant! 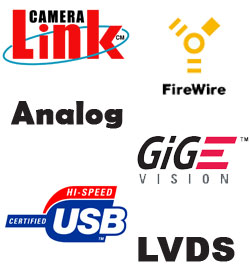