The requirements for transmitted light illumination are a homogeneously illuminated image and at the same time light aligned as parallel as possible.

As an LED background light is only loosely equipped with LEDs or a fluorescent background light only with a few tubes, the light must be spread softly over the whole area by means of diffusors. Now the homogeneity of light over the surface is granted, but the object edges can be illuminated at angles by stray light. The consequence is partial shade (soft grey transitions) between bright illumination and the silhouette of the object. The result is a measuring inaccuracy: the lower the contrast, the worse the measuring result or finding the object (however, please do not overexpose for "maximum" contrast!).

Even with backlight no sharp silhouette is generated at round shiny object contours. Lateral scattered light generated penumbra at object edges.

The effect of the filter can be demonstrated by taking the transmitted lights at angles. As mainly vertical rays are passed through the filter, no light can reach the camera at angles: the filter appears almost black: 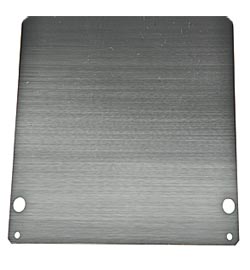