These filters are capable of avoiding reflections which often inevitably arise when using not perfectly diffuse light sources. Reflections can even appear on dark, glossy materials as completely white image regions which cover inspection characteristics and can thus prevent a successful inspection.

Disturbing reflections can be avoided on:

Light can be regarded as an electromagnetic wave, with the electromagnetic vector oscillating transversally (at right angles) to the direction of propagation. Unpolarised light itself can also oscillate in any direction. If you put a polarisation filter into the optical path, it is capable of absorbing certain oscillation directions of the light. For this purpose, chemical pigment molecules in the filter material are aligned in such a way that they can absorb light along their molecule structure and pass other planes of oscillation. In case of linearly polarised light, the electromagnetic vector oscillates in one plane only, any other directions are absorbed by the filter.

If two filters are arranged in a row and one is rotated through 90 degrees compared to the other, no light is passed; if their directions of absorption are identical, one plane of oscillation of the light is passed. Two polarisation filters can therefore also substitute a neutral grey filter. Depending on the alignment of the two polarisation filters, an infinitely variable dimming of the image can be achieved.

Polarised light can be generated in different ways:

Polarisation filters do not have an influence on the colours of the inspected image. They are therefore suitable for colour and monochrome cameras.

Reflections on plastics can effectively be suppressed. For this purpose, polarised illumination and a polarisation filter on the lens must be used in order to suppress disturbing reflections. The application of this method, however, requires light in abundance, as a lot of light is absorbed by the filters. In case of LED lighting, for instance, this can be compensated by using an LED flash controller.

The principle of reflection suppression on shiny, non-metallic surfaces like plastics, glass and water is based on the fact that light inciding at a particular angle is polarised at the surface of the materials. In case of an angle of emergence of 30 to 50 degrees (Brewster angle), this effect is especially common. If the polarisation filter is aligned in front of the optics in such a way that this polarised light is blocked, the unpolarised background is clearly visible again: reflections of light at the surface disappear.

Despite diffuse illumination many reflections are on the colorful printed bag.

Polarizer on illumination and optics avoids reflections on packaging bag.

Transparent films, too, can show significant gloss effects in incident light. Particularly in case of outer packaging like shrink wraps, bags, blister packs, etc. an inspection of the actual packaging content is hardly possible. Remedy is provided by a combination of a polarisation filter on the illumination and the optics.

Despite diffuse illumination many reflections are on the crumpled plastic bag .

Metallic sheen on metal surfaces can be suppressed by using a polarised source of light and a polarisation filter. The metal parts appear very dark in the camera image. Especially uneven objects like cylindrical, curved metal surfaces or crinkled foils (aluminium blisters, etc.), can usually hardly or very difficultly be illuminated in a homogenous way. Depending on the position of the test objects in the inspection area, these reflections can "move" strongly on the surface. A taught object can then look very different: the result are misinspections. These difficulties are avoided by using the mentioned illumination and filter technologies.

Many reflections on metal part. This can cause problems e.g. with object search or code reading algorithms.

A special effect is the use of polarisation in transmitted light. In this case, one polarisation filter is mounted on the background lighting, another one on the lens, they are aligned in such a way that the light is completely blocked: the picture looks completely dark. If optically active materials are illuminated now, they shift the plane of oscillation of the polarised light, resulting in a brightening. Hard transparent plastics can be made visible in this way, which would be hardly identifiable in transmitted light. Examples for this are transparent bottles and containers (detergent bottles, etc.) or inserted displays (e.g. check of presence of displays in a telephone housing, etc.).

Equally clearly visible is material stress in the plastic (subject of photoelasticity). The photoelasticity with polarisers allows for the analysis of stress distribution in transparent objects, e.g. injection-moulded plastics. Inclusions in the material and imperfections in foils, moulded and wrought plastics such as transparent PET bottles, etc. cause stress which can be examined in this way. 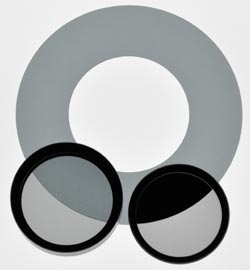