CMOS sensors are increasingly used in machine vision. For a long time these image sensors had the (justified) reputation to produce blurred images, to have many pixel defects and to be less light-sensitive. Yet many of these disadvantages have continuously been compensated thanks to enhanced production technologies, and micro-lenses on the pixels (in order to enlarge the light-sensitive surface) and back-side illuminated CMOS sensors (back-side illumination of the sensor through very thin substrate instead of exposing through several structure layers on the surface) gave this technology its break.

And the advantages of this technology are not to be underestimated. Due to the integration of the readout electronics into the sensor, particularly energy-saving, cheap and compact designs can be realised. Especially the high resistance to blooming effects as well as high frame rates are interesting for machine vision.

CMOS stands for "complementary metal oxide semiconductor" and describes a certain type of electronic circuit. Just like CCD sensors, these sensors are based on the photoelectric effect and convert the incident photons into electric charges. The difference to CCD sensors is the way of transmitting this information.

A capacitor is connected in parallel to each individual photo diode, which is charged by the photocurrent. The generated voltage is proportional to brightness and exposure time. As opposed to CCDs, the electrons gathered during the exposure are not shifted to one readout amplifier, but each single image element is associated with an amplifier which directly provides the analogue signal processor with this capacitor voltage. In case of CMOS sensors, several transistors are associated with the light-sensitive diodes which convert the accumulated charges into measurable voltages.

Each pixel can therefore individually be read out electronically, without having to be shifted like in case of the CCD sensor. The result is less blooming in the event of overexposure. The disadvantage is that the additional transistors absorb incident light and are not available as light-active surface (indicated as fill factor). As a result one theoretically gets less image information and they work worse in faint light.

Just like CCD sensors, state-of-the-art CMOS sensors can empty the charges of all pixels at the same time, capture an image and read it out synchronously. Yet further transistors per pixel are required for a CMOS sensor with global shutter at the cost of image quality, as the light-sensitive space on the surface is further reduced in this way.

CMOS sensors with rolling shutter therefore tend to be cheaper, however, they can provide better images due to a larger light-active surface maintaining the total size (if not economising on this). Today digital single-lens reflex cameras use rolling shutter CMOS sensors, as an additional mechanic shutter completely solves the problem of continuous exposure and readout.

Advantages and disadvantages of the CMOS sensor technology

As the conversion of the charge into voltage is done by integrated readout electronics for each pixel directly around the pixels, there are many advantages compared to CCD sensors:

As the conversion of the charge into voltage is done by integrated readout electronics for each pixel directly around the pixels, there are also technical disadvantages compared to CCD sensors: 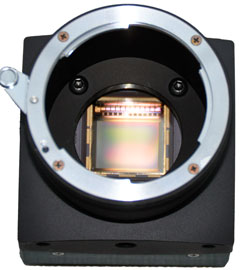