It is the aim of the calibration to generate an absolutely homogeneous grey image. Deviations from the ideal image result from many reasons:

Typical for these interferences is that the image has stripes, inhomogeneity or shading towards the margin, which can significantly affect an evaluation by means of machine vision software. Wrong mechanic positions and optical distortions further blur the image.

A calibration chart helps to determine these interferences and deviations, which fulfils many functions at the same time. Further details on (re)calibration:

Before the development of a software application is started, the output image must be made PERFECT.

By means of the encoder settings and the corresponding multiplier / divisor settings on the line trigger input of the cameras, a distortion-free image must be generated first.

Please do not rely on your eyes, but measure, e.g. by means of a calibration grid, the form of circles or squares in X-direction and Y-direction. Only in this way you can be sure that you capture undistorted images of good quality.

Vertical lines and shading effects of the illumination

First of all make sure that the illumination exactly covers the captured image region. Tips for the alignment of the lighting can be found here.

In order to compensate this inhomogeneity, each renowned line scan camera manufacturer provides a ready-made software interface for the calibration of the camera.

The calibration is done in one or two steps:

Any vertical image stripes should now have vanished and the image appears homogeneous. Then effect the fine tuning by means of the exposure time of the camera, the gain and the aperture of the lens and re-focus the optics.

This calibration process served to compensate both sensor-related production differences and the brightness decrease on the margin of a line illumination (shading correction).

Very rarely there are also horizontal stripes. They can have several reasons:

Each colour camera, also line scan cameras, requires a white balancing in order to obtain neutral colours. Due to the colour temperature of the white light used (spectra of halogen lamps, LEDs, fluorescent lamps) the distribution of red, green and blue intensities in the camera image is not homogeneous. The different spectral sensitivity of the sensor for different wavelengths additionally intensifies this effect.

The image and path intensity diagram of a colour line scan camera shown here has two typical errors which must be calibrated: 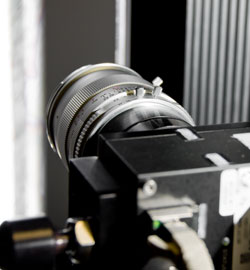