Light-emitting diodes, LEDs for short, have been used for approximately 10 years in industrial image processing. By constantly improving the semi-conductor materials, the intensity could be increased extremely. Today, LED lights cover a major part of industrial applications. Halogen and fluorescent lamps are only frequently used in applications which require large-area illumination, like robot applications or line scan camera inspections where much light and/or the illumination of large areas is required as well.

Reasons for the frequent use of LEDs

Functional principle of the LED

Electroluminescent diodes work like semiconductor diodes which generate light in forward direction. Light is emitted in this way. The abbreviation LED stands for "light-emitting diode". The energy and colour of generated light is determined by the semi-conductor material used and its doping. Mixed crystals such as gallium arsenide (GaAs), gallium arsenide phosphide (GaAsP), indium gallium nitride (InGaN), etc. are used.

The LED consists of a semiconductor material that is n-doped, on top there is a very thin p-doped layer which has a lack of charge carriers. When applying a voltage, an excess of charges is generated in the junction, which recombine with holes in the p-doped material and release their energy there. Since the upper layer is very thin, the light flash can emerge from the material. The light generated in this way is monochromatic due to the exactly defined energy amounts of the semiconductor material. As opposed to an incandescent lamp, the light always has one particular colour.

White LEDs, too, primary only generate monochromatic light. Only by means of a trick, white light is produced: The light of a 100% blue-emitting LED stimulates yellow fluorescent dyes, which are arranged around the light-emitting crystal. White light is mixed from the direct emission of blue light and the fluorescence of yellow-green and red light.

The luminous intensity grows proportionally to the amperage, which is used in industrial machine vision in order to generate high quantities of light by means of high-power LEDs. A consumption of 5 - 25 watts is typical for an LED illumination. The energy yield can be increased even further if you increase the amperage over 100% of the permissible value. The LED would be damaged in continuous operation immediately. By means of a flash controller, however, short intense current pulses (1 per inspection) can be used to overflash to the triple to sixfold quantity in order to generate a multiple of the luminous power. 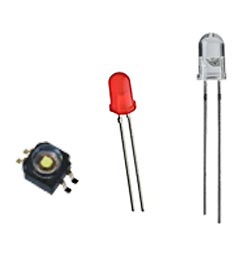