Lasers can be used as a special type of illumination for industrial machine vision. The laser beam can have different shapes which, except for dot or line shapes, are generated by means of diffractive optic elements.

By means of the projected laser beam pattern, inspections and evaluations can be effected in the image which would not be possible using conventional forms of illumination.

Why use laser light for inspection?

Laser light represents a sharply focusable beam which can be imaged quite precisely even over longer working distances. The extremely directional light precisely represents the light pattern which can be evaluated in the camera image.

Using a simple line the profile of the elongated workpiece can be evaluated.

Three-dimensional shape of metal component is made visible by laser grid.

Using a multi line, the shape of the workpiece can be checked at different locations simultaneously.

Whereas normal illumination generates a two-dimensional image (X / Y), lasers often serve to obtain information about the spatial contours (Z-axis). If the spatial displacement of laser lines projected at angles and other patterns is evaluated, we speak of laser triangulation.

A large number of applications can be realised using lasers. Sometimes only a bit of phantasy is required to integrate this somewhat unusual type of illumination into the design. Detecting objects, positioning parts, identifying different objects and recognising contours are typical fields of application.

Example 1:
A vertically projected circle appears varyingly large in the camera image, depending on the object height. The diameter of the circle allows for very simple conclusions about the height and the working distance of the object. In this way it is, for instance, possible to recognise how many stacked layers still remain on a pallet.

Example 2:
One or several laser lines are projected at an oblique angle onto some flat material, such as paper or foils, etc. If the material is corrugated, wrinkled, compressed or bent, the laser line is also undulated or arc-shaped. Due to the homogeneous material, this could not be detected in a normal camera image using diffuse incident light. Material jamming in the production line can be detected in this way.

Example 3:
Curvature or recess? Is the part the right way round? Hardly visible in the normal camera image, yet a laser pattern bends into the respective direction. When using several laser lines, also complex surface geometries, such as washbasins, can be differentiated and identified.

Gap measurements and displacement checks on parts and modules according to the principle of laser triangulation are often used in the automotive sector. For this purpose one or several lines are projected and the line displacement and the shape and length of the individual segments are measured.

By means of a line-shaped laser beam, a 3D camera for the determination of the triangulation profiles and a movable scanning unit it is possible to generate three-dimensional data and images of the objects. This is one of several possibilities to process 3D images.


Tip:Online wizards for triangulation and laser line calculations can be found in the "Service" section. 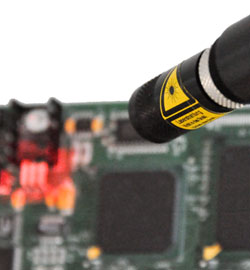