At a first sight, images captured using dark field illumination seem unusual to the viewer. The light shines at a shallow angle. According to the principle "angle of incidence = angle of reflection", all the light is directed away from the viewer (the camera), the field of view therefore remains dark.

Inclined edges, scratches, imprints, slots, and elevations interfere with the beam of light. At these anomalies, the light is reflected towards the camera, or mostly only strayed. These defects appear bright in the camera image in this way.

This scheme illustrated here already shows the gradual transition from bright field to dark field illumination. Due to stray light effects caused by the texture, the surface is is still sufficiently bright that the object is easy to recognise. However, inclined edges and notches are brighter than the remaining image areas, which is typical for dark-field illumination.

Surface due to scattered light brightened up alittle bit, edges faced towards the illumination appear bright.

The scheme illustrated here shows the effect of a very strong dark field. The light shines on the surface at an extremely shallow angle. Small scratches, scuffs, dust particles, and even fingerprints on polished surfaces can be made visible, while the surface appears very dark.


Extreme dark-field illumination should be positioned very close to the surface. Working distances from 0.5 to 2 cm are maximally possible. If the distances are greater, the surface is no longer illuminated.

Very low angle of light produces a strong emphasis on the edges.

Strong emphasis on the edges and some scattered light at the surface of the coin.

Very low angle of light produces a strong emphasis on the edges. 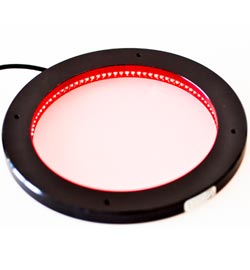