Light from the side can be radiated at a relatively wide or narrow angle. The influence on the camera image can be significant, in an extreme case the image information can almost be inverted.

This can be tested very easily: Just take a not too extensively radiating illumination and move it from a vertical position to a lateral position and watch the camera image of the illuminated object! Similar effects may be obtained by tilting the camera axis towards the component surface using a constant illumination direction.

In case of rather perpendicular illumination, we speak of "bright-field illumination" since the object can be illuminated brightly. Depending on the illumination angle, scratches, steps, sloping edges are depicted darker or even brighter.

In case of non-glossy, slightly rough surfaces usually sufficient stray light reaches the camera in order to illuminate the plane object quite "diffusely". In case of sufficient light, you can therefore do without a diffuse incident light illumination.

In order to avoid shadows on one side of the object it is useful to illuminate the object from at least two sides. In addition, a brightness drop is avoided from one image side to the other, which can cause problems in image evaluation. Instead of a ring-shaped lighting, rectangular light panels or rod-shaped light sources are often used now.

Lateral, diffuse incident light (like the illumination in the top right corner of this page) may possibly be a real alternative on plane surfaces if the point is to illuminate them diffusely. However, they are more uncomplicated to use compared to a coaxial illumination with a semi-transparent mirror.

Lateral light (from one side) can emphasise surface structures within the material, such as deeper grooves. The side facing to the light appears dark, the edge inclined towards the object is bright. A not too shiny surface appears, as mentioned above, appears rather medium grey.

Surface due to scattered light brightened up alittle bit, edges faced towards the illumination appear bright.


This scheme illustrated here already shows the gradual transition from bright field to dark field illumination. Due to stray light effects caused by the texture, the surface is still sufficiently bright that the object is easy to recognise. However, inclined edges and notches are brighter than the remaining image areas, which is typical for dark-field illumination.

A very strong roughening of the material also takes place when labelling using lasers. At first sight, the resulting microscopically rough surface appears smooth and looks bright and metallic, but when using lateral illumination it generates much stray light and reflections:

Smooth metallic conductor paths reflect light away from the camera, the rough datamatrix code surface scatters the light towards the camera 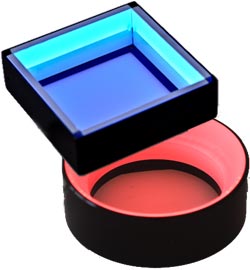