By means of a polarisation film in front of any industrial illumination, light can be polarised. There are flexible foils with a thickness of 0.25 mm to 1 mm available to the user. Thicker filters of 2 mm and more are typically delivered as hard plastic plates.

If you put an additional glass polarisation filter in front of the optics, the polarised light is selectively blocked or passed. The principle of polarisation and filter effect is described in detail in the chapter "polarisation filters". There you can also find further examples.

In this way interfering reflections can be avoided on:

Example of polarised light and polarisation filter on the optics

Metallic sheen on metal surfaces can be suppressed by using a polarised source of light and a polarisation filter. The metal parts appear very dark in the camera image. Especially non-plane objects like cylindrical, curved metal surfaces or crinkled foils (aluminium blister, etc.), can usually hardly or very difficultly be illuminated in a homogenous way.

Despite diffuse light, many reflections are on the cylindrical part.

Polarizer on lighting and optics avoids reflections on pipe and metal disk.

Depending on the position of the test objects in the inspection area, these reflections would "move" strongly on the surface. A taught object can then look very different to the inspection software: this leads to misinspections. These difficulties are avoided by using the mentioned illumination and filter technologies.

Despite diffuse illumination many reflections are on the crumpled plastic bag .

Tips for handling polarisation films in front of the illumination 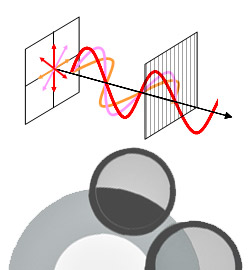