The surface texture of the test objects also plays an important role. Even completely identical materials, such as steel, plastic or paper, can have completely different textures like absolutely smooth, glossy surfaces or rather coarse, matte structures.

Most of the light is reflected at the relatively smooth surface. Due to the surface processing (brushing, sand-blasting, matting) or an oxidised layer on the surface of base metals, the light is increasingly strayed. A light spot is still clearly visible, but significantly larger compared to completely reflecting materials.

Directly aligned, non-diffuse illumination incides on matte, porous surface and is strongly strayed and reflected into many directions there. Clearly less light incides on the camera system, the image appears noticeably darker. However, hardly any disturbing reflections are visible in the image, even if the camera inspects the object from the direction of the angle of reflection.

Figure: Direct light spot no longer visible thanks to a large stray light proportion and high remission. Only marginal shading visible due to too little ring illumination. 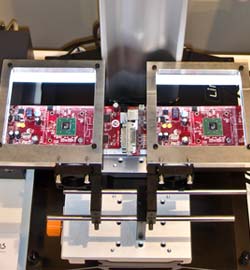