Light visible to the human eye is electromagnetic radiation with wavelengths between 380 and 760 nanometres. Below 400 nanometres, we speak of ultraviolet radiation (UV), which ranges up to 10 nm as extremely harsh UV radiation. The UV ranges of the radiation which are included in sunlight are referred to as UV-B from 280 nm to 320 nm and as UV-A from 320 to 400 nm. Beyond the visible light spectrum we speak of infrared radiation, which is also erroneously called "IR light". It comprises the wavelengths from 780 nm to 2500 mm in the near IR, the wavelengths from 2.5 µm to 50 µm are called medium IR.

The properties of light can be described as wave character and particle character (wave-particle duality). A variety of phenomena and effects also appear in industrial machine vision, which can be derived directly from these characteristics.

The wave characteristics of light are used as a theoretical basis for geometrical optics: the path of light rays through a lens caused by refraction is subject to these laws. The machine vision expert uses these principles for the selection of optics and the calculation of the working distances. Yet also reflections at surfaces are subject to the principles of geometrical optics. Working with structures the size of which is in the range of the wavelength of light, this will result in further interactions. Possible effects of the theoretical wave optics are interference, diffraction and polarisation.

The particle characteristics of light are studied and described in quantum optics. These quantum-mechanical aspects of light explain emission and absorption effects of bodies, the Compton / Raman scattering and the formation of spectral lines, e.g. of lighting sources, such as LED lighting, fluorescent lights and metal halide lamps in cold light sources.

Most of these theoretical basics can be observed by the user in machine vision practice, as test objects…


Conclusion:
Some of these effects are undesirable and make it difficult to evaluate the inspection of parts. On the other hand, these specific properties of the objects can be used in combination with appropriate lighting, the right lens or the appropriate filter in order to detect errors or find defects in the test object. A suitable camera sensor can also help to solve the problem. 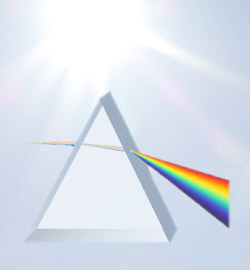