Diffuse light is necessary for many applications, as soon as reflective, polished, glossy or metallic objects must be tested. It is particularly difficult if these surfaces are no longer perfectly flat, but individually shaped, wrinkled, curved or cylindrical.

Not every "diffuse" light source is truly diffuse. Here a direct comparison of the above-mentioned lighting types. An almost perfect reflection-free illumination is only achieved using dome illumination.

No annoying wrinkles recognizable because the image is perfectly illuminated diffusely. Even the tablets nests structure does no longer three-dimensional.

Flat surface is largely free of reflections, with slight deformation of the surface again reflections visible.

Coaxial lighting, just like dome lights, must be very close to the object in order that the diffuse stray light can illuminate the surface very homogeneously. The longer the working distance, the more directed is the light; notches, scratches, etc. in the surface become more and more clearly visible again.

In the easiest case, a simple incident light illumination can be equipped with a diffuser, e.g. an LED ring light with diffusing panel. In this way, the directed light can be homogenised slightly better. Individual LEDs, for example, are no longer discernible on a reflecting material. The light, however, is still quite strongly directed and mainly comes from the direction of the illumination.

This type of lighting couples light into the optical path from the side (coaxially). This is done with the help of a semi-transparent mirror which is illuminated sidewards and casts light downwards on the test object. The object reflects the light which reaches the camera through the semi-transparent mirror.


The advantage of this lighting design is the "view" through the light source (in this case the mirror). The image as a whole looks very homogeneous and has only a general linear loss of light, the further the mirror moves away from the lamp. Tip: In order to avoid inhomogeneities, the illumination must be clearly larger than the area to be inspected.

Coaxial illuminations are perfect for highly reflective materials which have a relatively flat surface. They are very homogeneous, but rather directed and produce contrast at edges and greater curvatures.

Material is illuminated quite homogeneous. Scratches on metal still easily recognizable. Many fine scratches are gone. Even more diffuse illumination with dome illumination would be possible.

Ideal working distances for coaxial illuminations are short distances from 1 to maximally 3 cm.

Rule of thumb: The closer the better, if you want to use the somewhat diffuse nature of the lighting in order to achieve soft illumination!

The further the light is away, the more the soft illumination by means of the little stray light gets lost and the light becomes more and more directed. Bevels, engravings and errors, etc. which represent a no longer perfectly planar surface are still more emphasised.

Only a dome light is able to produce truly diffuse light, avoiding reflections on the component to the greatest extent. Due to the homogeneous incidence of light from all spatial directions, irregularities and scratches are also illuminated very softly, uniform material appears homogeneous.

These images typically appear rather "featureless". Reflections, shadows, surface irregularities, scratches, etc. are suppressed. Up to a surface angle of almost + / - 45 degrees, structures are illuminated uniformly. Other materials and components with different colours are clearly visible only now.


A dome illumination is perfect to inspect metallic and shiny materials and to suppress reflections.

Variations of this illumination are only slightly arched lights that can illuminate a much smaller solid angle. Tunnel-like dome illuminations have an elongated dome shape and are ideal for illuminating cylindrical objects.


Influence of the working distance

If you want to illuminate a test object as diffusely as possible, it is usually necessary to choose a small working distance. With increasing distance, the light source appears more direct. The consequence is a smaller illuminated solid angle. Stronger object curvatures are no longer illuminated.

More and more border areas not illuminated, the lateral light components for homogeneous illumination are missing.

Only small bright zone. Half of Edikette will appear dark. 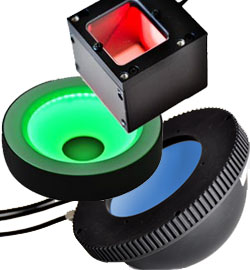