Changing the aperture affects the


The international aperture scale is arranged in such a way that each step means halving or doubling the exposure time.

The diaphragm blades reduce the opening diameter of the optics by the factor 1.4 (square root of 2), corresponding to halving the opening surface.

Therefore the indication of the aperture is often given as a fraction of the focal length and not as an absolute value in millimetres, they are referred to as f-numbers or f-stops. Lens indications of 1/4 are also written as f/4, F4 or 1:4.

The values of the focal ratio indicated on the lens are normally calculated for an image from the infinite. However, in case of images from a short distance, which is rather common in machine vision, it becomes apparent that the image is darker. In case of macro-images, this effect is particularly obvious.

The image scale β is calculated from

In case of an image of 144 mm ("postcard size" as object field) on a 1/3" camera chip with 4.8 mm, the result is β = 1/30, i.e. β does not carry much weight in the above formula. Using very small object fields and comparatively large sensors, the effective focal ratio can vary strongly. The picture appears clearly darker.

Tip:
An online wizard for the calculation of the effective focal ratio can be found in the "Service" area of this website.

By cutting off marginal rays (artificial vignetting of the optics), certain imaging errors like chromatic longitudinal errors, spherical aberration, coma and astigmatism are reduced when stopping down. In this way the quality of the optic image is enhanced, as focus differences and other blurred imaging forms are avoided.


Optimum imaging results are mostly achieved using an aperture of 5.6 to 8 in case of entocentric lenses. Further closing of the aperture intensifies the increasing effect of light diffraction at the mechanic slit of the diaphragm, which in turn may result in a reduced sharpness of the image. 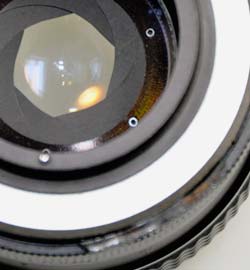