A prerequisite for robust inspection is a sharp image in most of the cases. In Z-direction (towards the camera and away from it) only a small area within certain limits is sharp: The depth of field is the scene space in depth, away from camera and optics, which appears sufficiently sharp in the video image generated by the camera. A sharp image impression is given up to an image unsharpness of approximately one pixel, in measuring applications, however, it should be kept as low as possible. For inspection applications it is important that all features to be inspected are located within this depth of field area.

Calculation of the depth of field

Factors for the field of depth

In case of a completely pre-set camera system with fixed mechanic dimensions and already selected components, only the lens aperture has an influence on the field of depth: if the user closes the aperture of the lens, the field of depth in the image is increased. A higher focal ratio, however, results in a longer exposure time. The international aperture scale is arranged in such a way that each step means halving or doubling the exposure time.

Small depth of field , but short exposure time of 0,16ms .

Large detph of field, but a long exposure time of 20 ms for the same brightness was needed .

In our example, the optics was focused in such a way that the object y1 is depicted as a sharp image y´1 on the sensor. An object which is closer to the optics generates a point of focus behind the sensor (by re-focusing to this working distance, the lens group would actually move away from the sensor in order to create a sharp image again). Therefore the image on the sensor (image plane) is blurred, the ideal sharp pixel blurs to a larger light spot called blurred spot. The resulting unsharpness is only perceived when the diameter of the blurred spot is larger than the camera pixel and its image information is depicted on neighbouring pixels.

By stopping down the optics, the optical path is artificially vignetted and the blurred spot on the image sensor becomes smaller. The objects y1 and y2 can now be much further away from each other in order to create the same blurred spot as in figure a).

By stopping down the optics, the optical path is artificially vignetted and the blurred spot on the image sensor becomes smaller. The objects y1 and y2 can now be much further away from each other in order to create the same blurred spot as in figure a).

The field of depth is the larger...

Formulae to calculate the depth of field

The exact calculation of the expansion of the depth of field requires several individual calculations. The formulae used here are based on the publication by Greenleaf, Allen R., Photographic Optics, The MacMillan Company, New York, 1950, p. 25-27.

However, these are only simple approximate equations, just like any other equations published on this topic. Image sharpness and depth of field are strongly influenced by the optic design and the optical errors. An unsharpness of the image points is additionally caused by chromatic and spherical aberration, coma and astigmatism and can make up one entire pixel already in case of very small camera pixels. 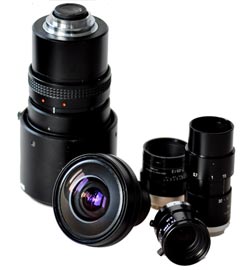