This special type of lenses is mainly used in measuring applications if the point is to measure without perspectival distortion in case of varying object positions (across the image field in X and Y direction). The aperture angle of the optics is virtually zero degrees within a certain fixed zone, i.e. the optical path is nearly absolutely parallel in an ideal case.

The result is that the image has no perspective error, every part of the image is depicted in parallel to the optical path: in comparison to entocentric optics, not only the centre of the picture, but also the picture margin is inspected vertically. Three-dimensional structures like bores and edges are not looked into.

In the middle of image perpendicular view, at image corners you can see the side of pins.

No perspective error. All pins are seen perpendicular. Opening angle of lens close to 0 degrees.

Another particularity of telecentric lenses is the effect that, even in axial direction (Z-direction, towards or away from the camera), measured distances have the same image scale within a defined range.

This means that even if the object is positioned a little further away or closer to the camera, the measured sections do not vary in the image!


The range in which this property is valid is called telecentry range. It is within the depth of field range, however, it is NOT identical to it.


When are telecentric lenses used?


The following applies in general: For all precision measurements it is recommended to use telecentric measuring lenses, if possible. They guarantee repeatability of the measurements even under not completely ideal conditions.

In most applications, the lenses are only telecentric towards the test object as the emphasis is on the correct capture of the part. An object-sided telecentric optical path is generated by means of a convergent lens in a diaphragm in the image-sided focal plane. A lens of this design is normally used in the applications described above: by means of object-sided telecentry, the perspective error can be avoided and parts can be measured to scale even if the working distance varies.

Quite a number of lenses is designed in such a way that the optical path is only parallelised towards the camera sensor, i.e. the focal point is in the infinite. An image-sided telecentric optical path is generated by means of a convergent lens in a diaphragm in the object-sided focal plane. The advantage of this design is the uniform vertical exposure of the camera sensor. Especially the interline transfer CCDs common today have micro-lenses attached to the individual sensor pixels in order to maximise the quantum efficiency. If the light hits these micro-lenses at an angle especially on the sensor edge, massive vignetting effects appear there. Without image-sided telecentry, the image would be strongly dimmed on the margin. The larger the sensor chip in proportion to the lens mount, the more often this effect can be observed. In this case, image-sided telecentric optics should be used.

If both methods are combined, lenses with double-sided telecentry can be designed. They have an excellent quality regarding optical errors, however, their production is expensive. These lenses typically have a particularly high object-sided depth of field. Furthermore these optics do theoretically not cause any geometric imaging errors, as the optical path is almost perfectly parallel both on the object and the image side. 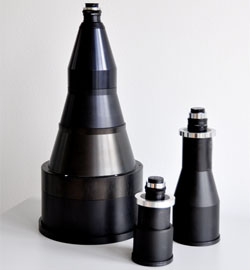